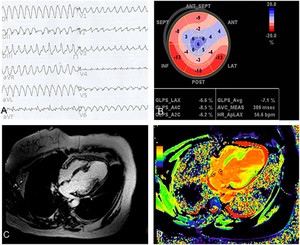 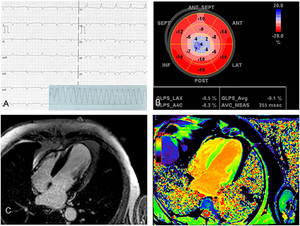 Chronic Chagas heart disease has different clinical manifestations including arrhythmias, heart failure, and stroke. Chest pain is one of the most common symptoms and when associated with changes in the electrocardiogram, such as T-wave changes, electrically inactive areas, and segmental wall motion abnormalities, may lead to a misdiagnosis of acute coronary syndrome (ACS). Here, we describe two patients with Chagas heart disease and syncope due to sustained ventricular tachycardia who were misdiagnosed with ACS, and discuss the role of novel imaging modalities in the differential diagnosis and risk stratification.

A 68-year-old man presented with an episode of syncope and VT, which was reversed with electrical cardioversion, during a recent trip to his hometown in Ceará, Brazil. He has been followed up because of Chagas heart disease in Rio de Janeiro and had no previous cardiac symptoms. Electrocardiogram showed sinus rhythm, low voltage, complete right bundle block, left anterior fascicular block, anterolateral electrically inactive area, and primary T-wave changes (Figure 2A). Echocardiogram (Figure 2B) showed moderate LV systolic dysfunction with apical aneurysm. After cardioversion, he underwent coronary angiography, and although only a myocardial bridge with coronary spasm was present in the anterior descending artery, an angioplasty with stent implantation was performed. Eight days later, he had a new episode of VT (Figure 2A) with spontaneous reversal and an ICD was indicated. Cardiac magnetic resonance demonstrated apical aneurysm and inferolateral mesoepicardial fibrosis (Figure 2C). T1 mapping showed diffuse interstitial fibrosis with elevated native T1 and extracellular volume (Figure 2D). Technetium-99m sestamibi single-photon emission computed tomography evidenced apical and inferolateral hypoperfusion in rest. After ICD implantation, he was released with no symptoms using regular medications plus amiodarone and clopidogrel.

Patients with chronic Chagas heart disease often present with angina-like symptoms associated with ischemic changes in ECG and segmental contractile dysfunction, which makes the differential diagnosis of coronary heart disease quite difficult.1 Although the possibility of associated lesions should be considered, these patients usually have normal coronaries, and their ischemia-like symptoms can be explained by coronary microvascular abnormalities. The appropriate diagnosis should be pursued to avoid overtreatment, as in case 2 who underwent a coronary stent implantation.

In the emergency department, patients with Chagas heart disease may present with syncope due to ventricular arrhythmia or even sudden cardiac arrest (SCA), mimicking an ACS. Scar-mediated reentry is the most common mechanism for VT in Chagas heart disease and occurs as a result of myocardial fibrosis, which is a strong predictor of major adverse outcomes.2,3 The aforementioned cases illustrate the use of CMR with LGE to help in the differential diagnosis. In Chagas heart disease, the pattern of LGE is usually mesoepicardial or transmural and the most frequent localizations are apical or inferobasal segments of the LV, which differs from ischemic cardiomyopathies, in which LGE matches a coronary territory distribution with a subendocardial fibrosis pattern.

Persistent subclinical inflammation in areas adjacent to fibrotic regions may act as a trigger for ventricular arrhythmia, which was evidenced in case 1. Our finding is in accordance with previous reports which suggest that inflammation could be detected with 18F-FDG PET/CT in Chagas patients.4,5 Better understanding of the role of inflammation detected by PET/CT may provide new parameters for risk stratification for SCA.

Chagas heart disease must be considered in all patients from endemic areas with syncope and VT, and ICD implantation should be indicated as a secondary preventive strategy of SCA in these cases. Ideally, the risk of sudden cardiac death should be evaluated in earlier stages of the disease, using new imaging methods such as CMR and PET/CT, for the implementation of primary preventive strategies. Unfortunately, despite its high mortality, there is no clear recommendation for early ICD implantation in patients with Chagas heart disease in current guidelines.

Recent advances in cardiac imaging may help us in the differential diagnosis between Chagas heart disease and ACS, and also in risk stratification for SCA. Both reported cases illustrate that even with previous diagnosis of Chagas heart disease, patients with syncope and VT are frequently considered as having ACS, revealing the lack of awareness of health professionals regarding this neglected disease.