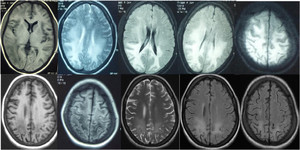 A 24-year-old woman presented 4 weeks after normal vaginal delivery with a complaint of bilateral vision loss. Vision loss was first noticed in the 20th week of pregnancy. After delivery, her vision did not improve. In the postpartum period, she started having periodic myoclonic jerks. On examination, she was conscious and oriented. Her blood pressure was 132/60 mmHg. Glasgow Coma Score and Mini-Mental State Examination was E4V5M6 and 10/27, respectively. Her vision, in both eyes, was limited to finger counting at 1 m distance. Her fundus examination did not reveal any abnormality. Pupils were of normal size with normal reaction to light reflex. Other cranial nerves were normal. Motor and sensory system examination did not reveal any abnormality, except periodic myoclonic jerks. Myoclonic jerks affected asymmetrically right upper, lower limbs and were predominantly present on the trunk (Supplemental Video). All her hematological and blood biochemical parameters were normal. Electroencephalography recorded periodic generalized discharges. A brain MRI performed in the 20th week of the antepartum period showed bilateral parieto-occipital cortical white matter T2/FLAIR hyperintensities. A follow-up brain MRI, 5 months later, revealed partial reversal of T2/FLAIR signal changes (Figure 1). Cerebrospinal fluid (CSF) examination did not reveal any abnormality in the protein level and cell count. However, CSF revealed markedly elevated anti-measles antibody titer. She was treated with six million units of intrathecal interferon-alpha weekly. There was no clinical improvement after 4 weeks of administration, so intrathecal interferon-alpha was not continued further.

In pregnancy, eclampsia is an important cause of cortical vision loss and posterior cerebral neuroimaging changes. Visual pathways from the retina to the occipital lobe can be damaged. Bilateral visual cortex involvement manifests with cortical vision loss.3 In cortical blindness, pupil function and ophthalmoscopic examination are normal, despite marked visual impairment. We, hereby, report an unusual cause of posterior reversible encephalopathy syndrome. CSF examination demonstrated an elevated anti-measles antibody titer in the CSF, confirming the diagnosis of subacute sclerosing panencephalitis.4

In pregnancy, for vision loss, there are several more common differential diagnoses, such as cerebral venous sinus thrombosis, Wernicke encephalopathy, and pituitary apoplexy. Cerebral venous thrombosis is common in the puerperium; however, it can occur at any time during pregnancy. Papilledema and headache are common. Patients with cerebral venous thrombosis may also have seizures and focal neurological deficits. Wernicke encephalopathy is typically seen in the first trimester of pregnancy with excessive nausea and vomiting. Wernicke encephalopathy is clinically characterized with diplopia, ptosis, or nystagmus, ataxia, and confusion. Pituitary apoplexy is caused by acute hemorrhage or infarction of the pituitary gland, generally within an asymptomatic pituitary adenoma. A sudden increase in the pituitary gland volume produces severe headache, vision loss, cranial nerve palsies, altered consciousness, and later hypopituitarism. In pituitary apoplexy, vision loss is caused by compression of optic chiasma by an enlarged gland.5,6

Vision loss, in SSPE, can result from involvement of structures of visual pathways, starting from the retina to the occipital lobe. Ocular complications, such as serous macular detachment, retinal, papillitis, optic neuritis, optic atrophy, and papilledema, are frequently reported. Bilateral visual cortex involvement caused by leukoencephalopathy changes, in our case, resulted in cortical vision loss. Occasionally, vision loss is a presenting sign of SSPE.4

The reason for partial resolution of parieto-occipital lesions is difficult to explain, as the patient did not have any blood pressure abnormality.

Intraventricular interferon-alpha along with oral isoprinosine is considered the most effective treatment for SSPE. This combined treatment stabilizes the course of the disease for a variable period of time. Intrathecal administration is less invasive and is an effective alternative to intraventricular interferon-alpha administration.11–13 In pregnancy, SSPE usually manifests acutely with fulminant course and may rapidly progress to a vegetative state.14,15 Our patient, at full term, delivered a healthy male baby via normal vaginal route. We did not find any response to intrathecal interferon-alpha.

In a patient with SSPE, during the postpartum period, cortical vision loss and parieto-occipital white matter T2/FLAIR MRI hyperintensities can simulate eclampsia. Inadvertent treatment with magnesium sulfate is likely if the diagnosis is missed.